What are the origins of trout in Washington State?

About a million years ago, the ancestors of all modern trout traveled up rivers from the ocean and into streams, tributaries, and alpine creeks. Early records show that many Washington rivers and streams and some lakes had trout in them when the white man first arrived. (2)

How were the mountain lakes in Washington created?

Most mountain lakes in Washington’s Cascades and Olympics were created following the last period of glaciation roughly 10,000 years ago. When the thick ice receded and melted, it left newly created basins, some deep, others quite shallow, which became today’s mountain lakes. Most of these were barren of fish unless there was unobstructed access into the lake via a river or stream. Unfortunately most mountain lakes have waterfalls and other significant barriers to upstream migration. So only a few high lakes ended up with natural trout populations. (3)

What is the definition of a “high lake” or a “mountain lake”?

Washington Department of Fish and Wildlife (WDFW) managers have defined a “high lake” as one situated above 2500-feet mean sea level in western Washington, and above 3500-feet in eastern Washington. These elevations are not arbitrary, but take into account the location of the sub-alpine and alpine zones, as well as other attributes. High lake fisheries are generally managed differently from lowland lake fisheries, with an emphasis on low fish density, and “quality” fishing opportunities. Compared with most lowland lakes, angler use levels are quite low. (3)

How many high or mountain lakes are there in Washington?

According to the commonly accepted definition of a mountain lake, there are approximately 4,700 high lakes in Washington. (3) 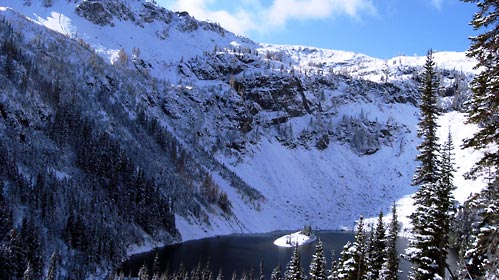 Fish Stocking in the High Lakes

How many high lakes have fish?

Of the 4,700 high lakes in Washington, only 1,777 (38%) presently have fish in them. The remaining lakes are fishless for a multitude of reasons. Some of them will not support fish because they are too shallow, or suffer winter or summer kills due to lack of oxygen, or because of other environmental factors. Some are left fishless because good management of the resource and the environment dictates this.

How many high mountain lakes are stocked and how many have reproducing populations?

Of the 1,777 high lakes in Washington that have fish, about 800 are periodically stocked. The remaining lakes, just under 1,000, have self-sustaining fish populations. (3) The present trend of the WDFW is to avoid self-sustaining fish populations in high lakes. There have been too many examples where reproducing fish populations over reproduce, resulting in large numbers of stunted fish and an environmental imbalance. Therefore each lake is carefully surveyed before stocking to be sure that the fish selected will either not reproduce or be self-limiting. Washington is one of the few if only states to manage its high lakes on a lake-by-lake basis.

Who stocks the mountain lakes?

Most of the mountain lakes in Washington were barren since the last ice age, so planting and stocking accounts for the bulk of the fish presence. In the early years trappers, miners, loggers, and outdoorsmen carried trout fry from local streams and stocked lakes for food and sport. By 1914, the United States Forest Service (USFS) was stocking many mountain lakes using mule trains. The Washington Department of Game (WDG) was created in 1933 and continued these stocking programs. The WDG is now called the Washington Department of Fish and Wildlife (WDFW). The WDFW stocks some mountain lakes directly by aircraft, and a few by truck, but by far the majority are stocked by volunteer groups, under the guidance of the WDFW.

Some groups, such as the Back Country Horsemen, use pack animals but most mountain lakes today are stocked by individuals carrying the fry by backpack. The Trail Blazers are the best known group in Washington for carrying juvenile trout into mountain lakes. This club of about 80 members stocks about 100 lakes each year, and about 400 lakes altogether. In other words, they stock about half of all the high lakes that are stocked. Most trout that you find in a mountain lake in Washington were stocked there by someone, usually a Trail Blazer. (3) 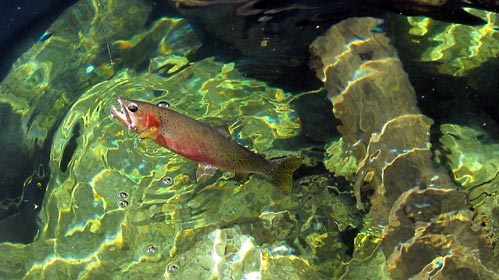 Why aren’t all the mountain lakes stocked with fish?

It is important that there be a balance in the natural biota, both for people and for the preservation of nature. Fish may provide you with a positive experience when you go into the mountains, but not everyone feels the same way. Some people want to go to lakes to see other forms of life or to see the mountain lakes as they were before man introduced fish. In order to maintain this natural diversity and balance in the mountains, at present about 62%, or nearly two-thirds, of all mountain lakes are being managed as fishless. (3)

What kinds of trout are in the mountain lakes?

The most common trout to be found in the mountain lakes of Washington are Cutthroat trout, Rainbow trout, and Eastern Brook. Two varieties of Cutthroat trout commonly found are the Twin Lakes Cuts (aka Westslope Cuts) and the Tokul Creek Cuts (aka Coastal Cuts). Most Rainbow trout are of the Mount Whitney variety. There are a few populations of Golden trout, Lake trout, Brown trout, Dolly Varden, Kokanee, Atlantic Salmon, Ross Lake Rainbows, and Arctic Grayling. (3) Of these, only the Westslope and Coastal Cutthroat, Dolly Varden (or Bull trout), and the Ross Lake Rainbows are native to Washington.

What do trout eat?

When it comes to food, trout are typically generalist and opportunists; they will feed upon a variety of prey depending upon what is available. They rely heavily on aquatic invertebrates, primarily larvae of aquatic insects. This includes stoneflies, mayflies, caddis flies, true flies, and at times damselflies and dragonflies. Terrestrial invertebrates such as grasshoppers, beetles, and ants are also prey items. It is typical for one or two sources of food to dominate the diet at specific times on an annual cycle. Although generalists and opportunistic, trout often feed in a very selective manner at any given time. Any serious angler will attest to this!

In some habitats, in addition to the aquatic insect larvae, crustaceans such as freshwater shimp, crayfishes, and tiny free-swimming “water fleas” are important food sources. As some trout become larger, they prey on smaller forage fish. These fish-eating trout are usually able to attain much larger sizes. Since the size of the prey is dictated by the gape of the open month, growing past a certain size opens the door to larger prey items and consequently to further growth.

The amount of food a fish must consume to maintain its body size is dependent upon the temperature of the water. Metabolic rates increase with higher water temperature, so more food must be consumed. Under normal circumstances, a trout must consume about one percent of its body weight per day to maintain its weight; surplus amounts are directed towards growth. The maintenance amount is greatly reduced during colder months and trout are able to subsist on very little, due to the slowing of metabolic functions associated with a decrease in water temperature.(2)

How fast do trout grow?

Fish grow according to several factors, the most important of which is the availability of food. The following data is taken from a mountain lake with average productivity. (3)

In lakes with better than average sources of food, it is not unusual to find a 10″ trout after only 1 year!

How long do trout live?

In most environments, the average life span of a trout is six to seven years, but this can be extended up to 25 years or more in some cold, high elevation mountain lakes. Some populations of Arctic Char can live for more than 30 years, and Lake trout often live 60 years or longer. (2)

When do trout reproduce?

Why do some trout have white meat while others have pink or red flesh?

The adage that you are what you eat is very true for trout. Trout with red or pink flesh have most likely been eating copepods or shrimp. Insect larvae usually result in trout with pale yellow flesh. In lakes where the trout eat black leeches, even the skin of the trout can become quite dark. (3)

Effects on the Ecosystem

How do fish affect the ecosystem?

The North Cascades National Park commissioned a scientific study to determine the effects of fish on the natural biota of mountain lakes, such as insects and amphibians. This study was done by William Liss, Gary Larson, and Robert Hoffman. Their results show that high densities of fish, which are basically lakes that have reproducing fish, have a negative effect on the balance of the natural biota in a lake. In contrast, they could find no measurable differences in the biota between lakes that have low densities of fish and those that have never had any fish. In other words, modest numbers of non-reproducing fish have little or no effect on the biota. For this reason, the Hi-Lakers support the present policy of the WDFW to stock low densities of fish in all mountain lakes. (1) 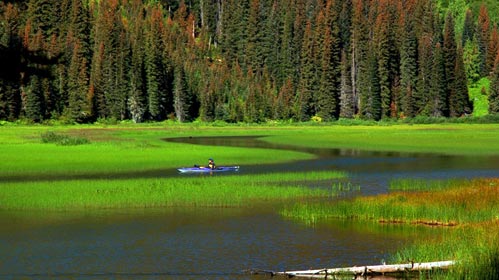 What does the Hi-Laker Club do to help the fisheries in Washington State?

Hi-Laker club members promote no trace hiking and camping techniques, clean up debris left by other people, and provide detailed lake surveys to the WDFW to help it manage the mountain lakes for a quality fishery.

Send an email to Rex Johnson or discuss it in our forum.

Does stocking fish affect the lake environment? This definitive study came up with a surprising answer:

By David Berger with Sandy McKean

Many folks wonder if adding fish to alpine lakes adversely affects the ecological balance. The most important recent scientific document concerning the issue is the so-called Liss & Larson report. This peer-reviewed study examined the impact of stocked trout on the insects, amphibians, invertebrates and plant life that live in high lakes - the native biota. It was commissioned to help determine the future of fish stocking in the North Cascades National Park (NCNP). Stocking is critical for high lake anglers because many lakes would not otherwise have fish. 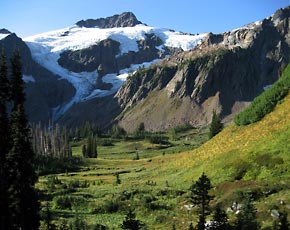 The study took 13 years, 1989-2002, and was accomplished in three phases. The results established that high densities of fish, which occur in lakes where fish reproduce, have a negative effect on the balance of natural biota. But in marked contrast, it reported no measurable differences between lakes that have low densities of non-reproducing fish and those that have never had any fish. In other words, and to many people's surprise, modest numbers of fish have little or no impact on the lake biota.

Consistent with the findings of the Liss & Larson report (as it is commonly known), the Hi-Lakers support "proper" fish stocking in the high lakes with non-reproducing fish in low densities. As it happens, stocking non-reproducing fish in low densities generally leads to a better quality fishing experience, in other words fish that are of a good size and avoiding the unpleasant situation of too many small, often skinny, fish.

[Stocking non-reproducing fish can be achieved in multiple ways, including by planting sterile fish, choosing the right species of fish that will not reproduce in the particular conditions, and selecting lakes that don't support spawning, for example without inlet or outlet gravel.]

To a great extent it wasn't until towards the end of phase 2 of the Liss & Larson report that the researchers appreciated the importance of data on non-reproducing lakes for making fish management decisions.

Biologist Mark Downen, of the Washington Department of Fish & Wildlife, provides a comprehensible summary of the very technical Liss & Larson report in his 2004 management proposals for the North Cascades National Park high lakes, based on Liss & Larson and other papers. On pages vi - vii Downen writes: 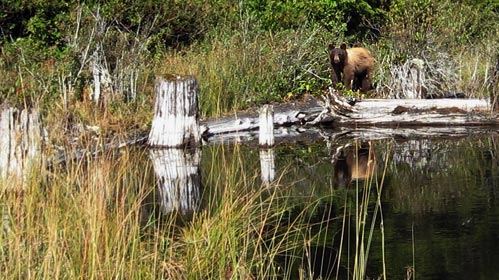