A Lake Too Far

This month from the archives we have another gem of a story from our friend Don Wicklund. This time he takes us on his fourth attempt at reaching a lake that beckoned his name from the moment he learned of it. Did he make it this time?? Read on to find out! — Tony Curless, HL communications chair

It was late in the year 2000, and I had just left my truck at the Dutch Miller Gap trailhead. As I started what was likely my last hiking adventure of the summer, I began thinking…

A few years ago I would never have considered a backpacking adventure like I expected this one to be. I wasn’t in great physical condition at the time, and I was dealing with a lot of joint pain. Since it seemed my days for strenuous mountain backpacking trips were numbered, I figured I had better get out and pursue my passion before I got “too old.”

However, instead of keeping within my ever-decreasing comfort zone, I pushed myself just a little, and the next time a little more, and then further. I also started taking better care of myself and there I was—about to take on what might’ve been the most demanding hike I’d ever tried, by myself, with rain and possibly snow on the way.

As simple as it may seem, I realized the same principle could be used in many areas of life… exercise, business, relationships, almost anything! Do a little more, go a little further, become a bit more uncomfortable; because the next time, by golly, you’ll likely accomplish more of your ambitions and continue to get better and better.

About a mile or so from the trailhead the path dipped close to the middle fork of the Snoqualmie. From there my plan was to cross the river and head directly up the mountainside. Far above me was the lowest section of the ridge where I hoped to cross over and drop down to my goal—Iceberg Lake.

The name alone made me want to go there. From my studies of the map this route appeared to be the shortest, albeit steepest and probably the most difficult. Looking up, I saw the clouds were low and moving briskly along the tops of the peaks, giving me a brief glimpse of the pass I wanted to cross. Sure, it looked steep, wet, and brushy, but I was ready for the challenge.

Thrice before I have tried to reach this forbidding lake. The first attempt was by way of Park Lakes with a night at Glacier Lake. Then up to Chikamin Lake, where I spent two nights and had a terrific time fishing, especially in the outlet pond.

The afternoon of the second day I worked around the side of the mountain for a panoramic view and a look way down at Iceberg Lake. It was a beautiful turquoise color surrounded by bright snowfields and steep rock.

As an amateur geologist I could easily see the evidence of a glacier that had poured down from the frozen peaks, scoured the bedrock smooth, and quarried rock debris into the lake. It was from that vantage point I realized I would have to go there at some later time, because it was too late in the day and my schedule dictated I head home the following morning.

Another try was by way of Avalanche Lake, a route that proved too difficult due to the thickening vine maple and steep terrain. My third attempt was by going past Glacier Lake again. However, that trip ended on the second day as I was ascending from Glacier when my left calf muscle suddenly decided to rip itself into pieces. That was a loooong limp out.

At the river’s edge I released the 65 pounds of weight from my shoulders and scrambled down to the bank. Using a perfect wading staff fashioned by some artistic beaver, I clambered upstream on the slippery rocks, searching for a point at which I could safely cross.

Thinking I had found a plausible crossing point I went back, gathered my pack, and made my way upriver. I stripped off my boots and pants, donned my water shoes, repacked my pack and started across.

About 10 yards into a 30 yard crossing I realized I could not succeed at that location due to the swift current and deepening water. Cold and struggling, I made shore and carefully picked my way further upstream past huge boulders and log jams for a shallower crossing with less current.

Trying again, I was alarmed to find my legs quivering from the weight, anxiety, and excruciatingly cold glacier water rushing past my bare skin. Failure wasn’t an option. With much determination I was relieved to make it across.

It had rained heavily the previous night and the brush and trees were soaked. So I put on my waterproof pants, coat, hat, gaiters, and even rubber gloves. As I thrust my way into the thick wet brush, where most sane men would never go, I soon discovered that water was getting through my waterproof layer and wetting my clothes.

I forged on but often found myself struggling with each step up the steep slope. Layers of extremely thick brush were constantly catching on my clothes and external frame backpack. Progress was very slow. Then some odd sort of small dark green trees began to appear. They became more frequent, eventually turning into a solid mass of thick evergreen.

The trees only grew about six to eight feet tall, but they were a most tangled web of branches—hard to bend, impossible to break, and tipped with dozens of sharp points that slashed at my skin. The infuriating little monsters clung relentlessly to my oversized and over-filled pack. At times I resorted to crawling atop the thick mat of Bonsai-like trees, occasionally falling through to the ground and pawing at the air like a turtle on its back.

Almost two hours into the struggle and making little headway, I came upon a tattered old marker ribbon left by someone else who had braved this route. Surely it would lead me toward my destination! I followed these little ribbons of hope – up, down, and sideways until I found myself suspended over a cliff with nothing but air beneath the tree branches I was crawling on.

This tangled web of vegetation ended where a creek had cut a deep ravine in the earth. Backing out, I worked my way down to this rocky creek bed where it was much easier traveling for a few hundred vertical feet. Eventually it got even steeper as the creek bed dissolved into waterfalls, cliffs, and more brush. I was forced to climb the steep wall up and out of the ravine. Then I had to fight against the opposing growth of tangled vine maple to gain more altitude.

I had become fatigued after such a series of deterrents. Though it was a cool 40 degrees, I was sweating inside my already wet clothes. After climbing three hours from the river at 3,000 ft., I had only reached an elevation of 3,700 ft. The ridge was at 5,600 ft. and Iceberg Lake was back down the steep rocky mountainside at 4,700 ft.

Rain and possibly snow were due in about two hours and I was already drenched. Even if I could make it to the ridge, I knew there would no longer be enough time to get to the lake before dark.

I understood that to continue would at best put me in a very vulnerable position, thus I developed my second realization of the day: Pushing on and accomplishing more can only be done in reasonable steps. One must also know when to say ‘enough’ and stop before going too far. To continue at that point would not have been smart. I hated the idea of carrying that heavy pack back down after working so hard to get it up there. But, grudgingly, I turned back.

The slippery rocks, steep slopes, and all that damn thick vegetation made going down almost as difficult as going up. Although with a gravity assist on the steep slope, at times it was like I was swimming atop the thick, brushy vegetation. Reaching the river offered little relief as I half undressed to make another treacherous, quivery—and hopefully successful—river crossing.

As I had prophesied, the rain started as I began my hike further up the maintained trail. In less than a mile I came upon a large camping area right on the river. It had a nice spot for a tent under the protective cover of magnificent old growth trees, a large fire pit lined with smooth rocks, and even a rounded log to sit on.

I quickly set about the tasks of making camp: Fire first, then rain cover, tent, dinner, etc. I had a nice evening tending a fine bonfire while drying clothes, drinking Peppermint Schnapps, and listening to the Mariners win another one!

After a night of hard rain I awoke to even more the next day. The moment it stopped I rigged up my rod and headed out to catch a fish. Shortly after, the heavy rain began again. But it didn’t stop me from catching and releasing two small brookies. I returned to camp soaked to the skin just as the clouds briefly parted. I caught a glimpse of the ridge far above where it had snowed hard above 5,000 ft. All the rain, wind, and snow validated the decision I made yesterday to turn back.

So there I was again, as the night before, enjoying a nice, big fire and drying my clothes. However, I was out of Peppermint Schnapps and the Mariners lost. The rain had stopped, but because I was under enormous old growth trees it still continued to drip from the branches. Each drop seemed to join at least 30 others before emerging far above my campsite as a voluminous mass of water the size of large marbles.

These monolithic monuments of H2O reached terminal velocity long before they hit the muddied earth, where they welled up such a splatter of debris that everything, including myself, was thoroughly speckled with mud and leaves and needles. These liquid bombs splashed around my tent spewing projectiles under the rainfly. It looked as though an entire kindergarten class had too much fun stomping, splashing, and kicking mud upon the walls of my “home.” I remembered why I like dry camping better.

I anticipated packing up my wet and heavy gear the following day, and making a beeline for the truck. I had a hankerin’ to visit the hot springs just 30 minutes down the road.

As I was hiking out, the clouds parted and for the first time I had an unobstructed view across the valley to where I wanted to cross the ridge over to Iceberg. It turns out I was less than a third of the way up and just getting to the steeper part when I turned around. With a better view of the mountain, I could also see that I had not chosen the best route. Again, I am glad I stopped.

Arriving at the parking lot of Goldmyer Hot Springs, I put on my water shoes and once again forded the freshly swollen river, thankfully guided by a fixed rope. I marched up the short distance to the hot springs and melted in the natural cave full of near-scalding water. Delightful!

It was the end of my fourth attempt to reach Iceberg Lake, and likely my last mountain adventure of the year. Next year—Higher and Farther… Dare to join me? 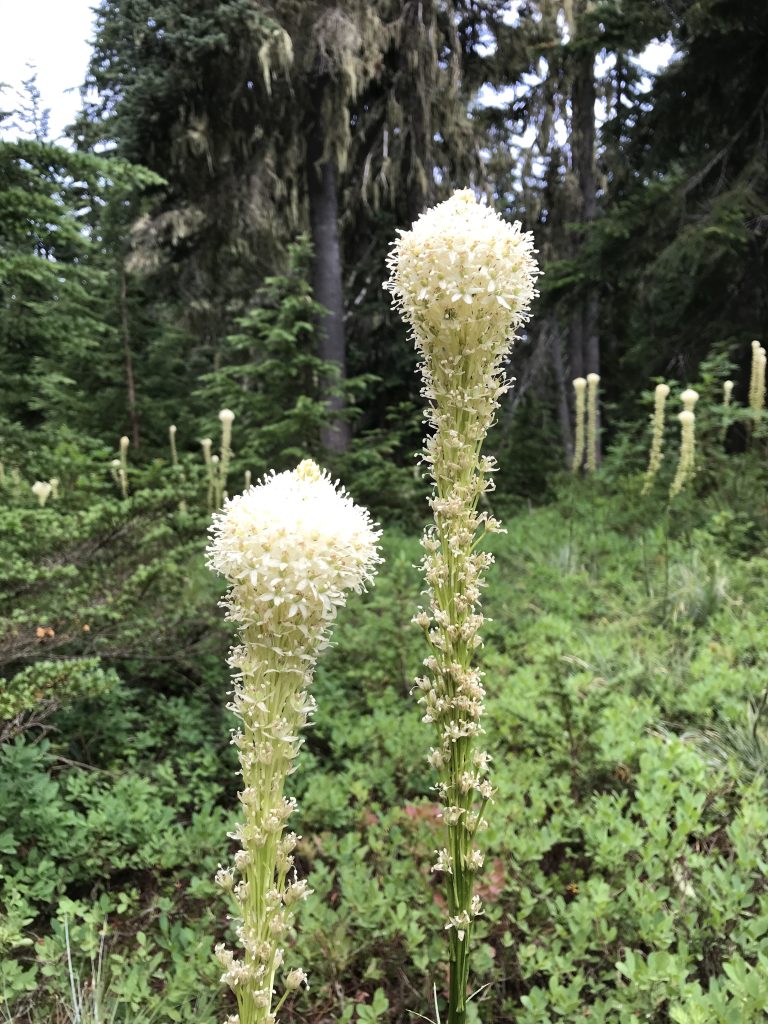 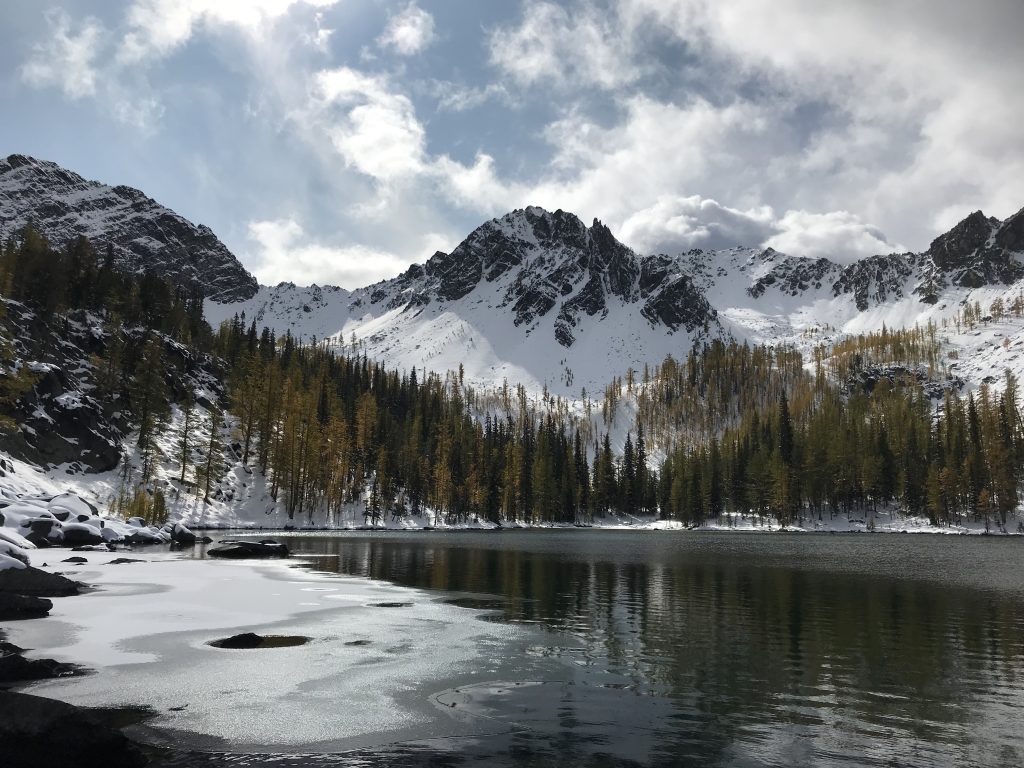 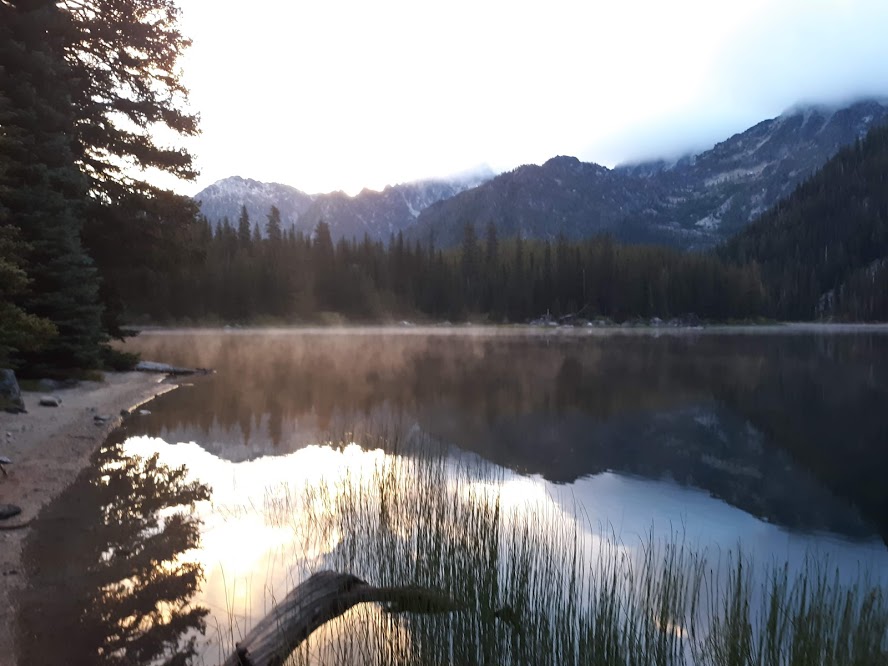 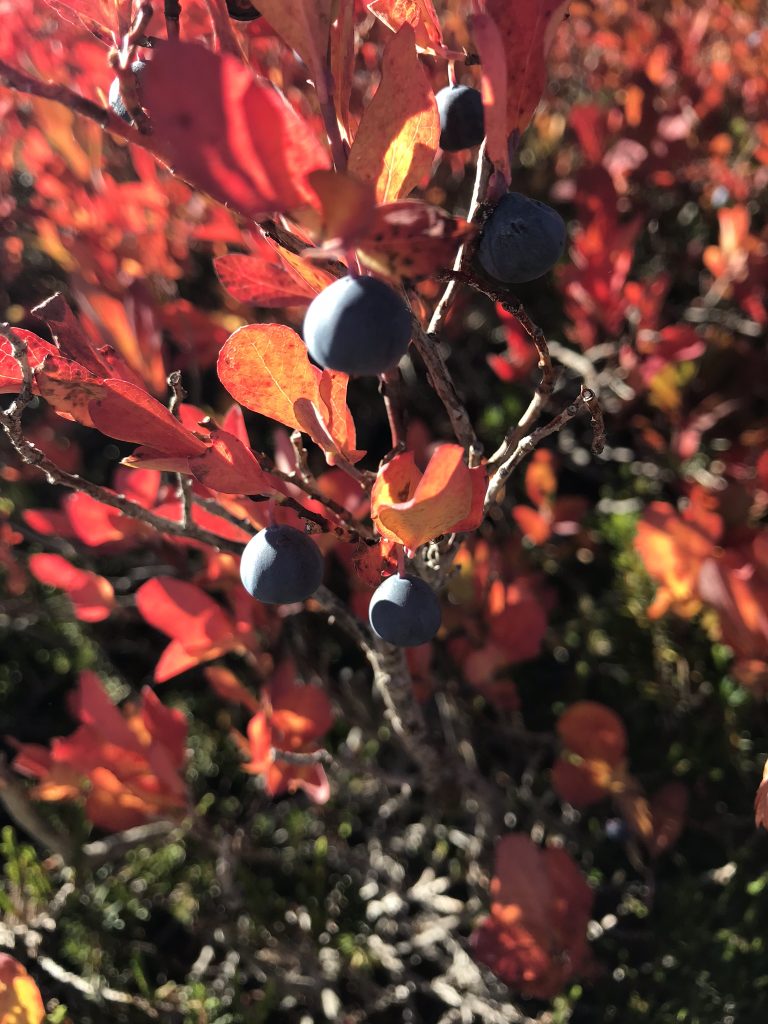 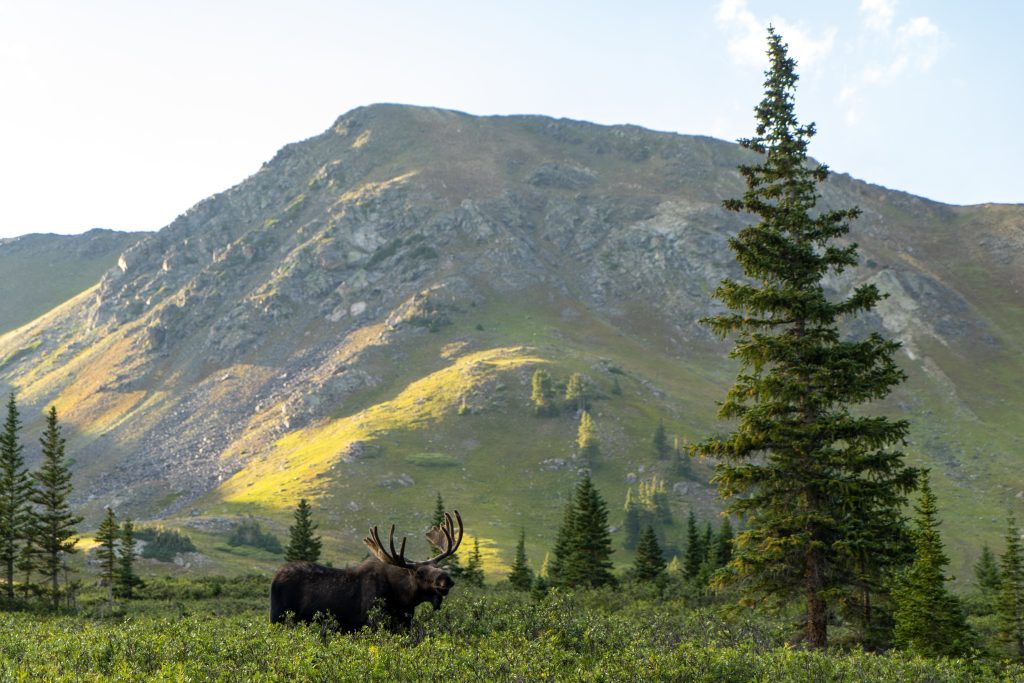