A True Fish Story for the Ages

My name is Rudy, and I want to share a story I love hearing from my uncle.   I call him “Brooster.”   Why Brooster?   I guess he just always seemed like a big rooster to me, so I called him that once, he smiled, and the nickname has stuck ever since.

There were 3 of them on this trip, uncle Brooster and his buddies Derbs and Renfro, to fish a Washington alpine lake.  The weather was sunny and cool, with a breeze in the air.  My story begins with each of them fishing out near the center of an alpine lake.   They had been fishing for an hour or two with little success.   Then the day was about to take on a radical change… one none of them would soon forget!

Uncle Brooster was trolling this thing he called an olive willy fly on an intermediate fly line, when he felt the take.  His fly was not far under the surface… as he tells it, roughly 5-10 ft, if I remember right.  He said he could tell by the first tug that it was BIG!  As soon as the fish felt resistance, it took off and was well into the backing in no time.  It took a few spectacular runs before settling on the lake bottom.  By this time, Derbs and Renfro were nearby.

With such a beast on the line, and fearful of losing it, he said his first instinct was to clear his raft of anything that could get in the way, so he asked Derbs to paddle up to his raft, whereby he handed him the 2nd rod and all of his gear.  He figured at the time he was probably going to need the extra space to pull the fish into the raft.  In the process of transferring his gear, the lines on BOTH of Derbs’s rods got tangled with his, along with his flies. He said he was totally panicking and freaking out!  While still fighting this huge fish, which none had seen to this point, he tried to get them free but they were pretty ensnarled.  Fortunately for him, the fish was just sitting on the bottom during all the chaos.  Uncle Brooster feared at any moment it would take a run or he’d need to reel in some line, which wasn’t an option with the lines tangled, so he had to think quick and cut them free with his nippers.  As Derbs turned his raft to give my uncle some space, his rod tips (and my uncle’s spare rod with a fly at the tip) whizzed towards uncle Brooster’s face!  Fortunately, he managed to duck them like Neo did in those old Matrix movies.  I love watching those movies!  My uncle chuckles when he says, “We were like the 3 Stooges out there on the lake…  it was both hysterical and terrifying!”

About 10 minutes into the hookup, the fish was still hugging the bottom… his rod was bent over deeply and pulsing, and at times the tip pulled close to the water surface.  As the huge fish moved longer distances, it would either take line or pull uncle Brooster with it!  And my uncle’s a pretty big guy….well, to me he is!  Efforts to bring the fish toward the surface were futile with 4X tippet (6.4 lb) tied between his fly and leader.  The pressure he was applying on the fish already felt close to the tippet’s breaking threshold.  Uncle Brooster was nervous and didn’t want to push his luck so he held on with constant pressure being applied.

The entire time he was connected to the fish he was thinking (or wondering, really) about how securely the fly might be hooked in the fish’s mouth, maintaining the right amount of line tension, and pleading for the integrity of his knots to hold…  He remembers thinking it was just a matter of time before something was going to “give” with the constant pressure and he would perhaps not only lose a fish of a lifetime, but lose a ginormous fish none of them had even gotten to see… Several times the fish changed direction causing the rod to bend 360 degrees as his raft reoriented to the direction of the fish and wind.  And each time the lower ferrule on his 6 wt rod made a disturbing groaning sound, he feared it would be followed by a “snap!”

Slowly he was gaining in this battle, and was able to reel in line… just a few inches at a time.  And eventually they got to see the mammoth fish for the first time. Derbs and Renfro saw it first, and uncle Brooster vividly remembers their reactions of disbelief; sending a bolt of adrenaline through my uncle’s body!  At first, he remembers being nervous about peering over the side of his raft as he didn’t want to take any attention away from his rod hand.  Eventually, the pressure and excitement was too great, and uncle Brooster leaned over to see what appeared shark-like; slowly swimming in circles about 20 feet beneath him in the dark, clear depths.   The fish looked impossibly large.

If his mind wasn’t racing before he saw the fish, it certainly was afterward!  With all the thoughts and worries running through my uncle’s head, it was a relief to have Derbs and Renfro close by.  Uncle Brooster kept reiterating that he didn’t want to lose this fish due to a stupid mistake.  I always love hearing uncle Brooster reminisce, saying, “The 3 of us would talk through scenarios as they came up, and were somewhat confident in being able to stay ahead of any surprises, and there were a lot of possible bad endings.  Had I been alone in this situation without support it would have looked very different… I’m sure of it!  I had fantasized about catching a huge fish at a high lake all of my life, and even walked through what I would do when the time came.  But what I saw swimming below me was far bigger than anything I could have dreamed of!”

Between the fish pulling and the wind pushing, and uncle Brooster only having one hand to paddle (the other was fighting the fish), he had very little control of his raft.  At one point uncle Brooster got nervous when he was getting close to a rocky shoreline that had lots of bottom structure that could catch his line. Derbs offered to tow him in to deeper water so my uncle threw him one of his paddles and wrapped the cord around his toes so that he could pull him away from potential hazards.  As Derbs pulled my uncle away from the shoreline and into deeper, water the fish continued to hug the bottom taking line with it!

(This is generally the point in the story where I always ask uncle Brooster, “Are you gonna catch the fish or what?”)

As he continues to talk about the story, he says, “It seemed like this would go on forever.”  Derbs suggested we take the fight to the shore where the fish would be in shallow water.  Uncle Brooster was worried the line would get caught on some bottom structure and the fish would break off, and insisted they stay in deeper water away from hazards, and where the fish would eventually tire and come to the surface.  Then, uncle Brooster leans in, raises an eyebrow, and whispers in his storytelling voice, “After seeing the size of the fish I was nervous about taking any unnecessary risks… I did NOT want to lose it. But the fish wasn’t coming up and I was beginning to worry about overexertion. With trepidation I conceded that Derbs was right and we slowly started working our way to a more forgiving shoreline.”

My uncle lifts his head proudly in the air as he reaches the climax of the story, saying, “Once we made it to the shallows, and after successfully getting out of our rafts (which we learned isn’t as straightforward with a huge fish on the line), Derbs grabbed his net.”  The little trout net in his hand seemed absurd given the situation.  Uncle Brooster guided the fish toward Derbs and he swiftly captured its head in the net while grabbing the tail with his other hand!  Then as always, he tears up as he tells me, “Roughly 40 minutes after feeling my line go tight, the 3 of us stood in disbelief and admired this incredible creature.  It was completely surreal… seeing a fish of this size at a high elevation lake was just incredible!!”

My uncle states that none of them had anything to measure the fish so he used reference points on his rod that aligned with its snout and tail. He later measured those points to learn that the fish’s length was 37” exactly!  Additionally, they had nothing to weigh the fish at the lake, so they had to guesstimate its weight based on picking it up. Each agreed it must have weighed somewhere in the neighborhood of 20 to 25 lbs.  Uncle Brooster, you can see it  in his eyes, now walks down memory lane as he shares with the uncle Brooster gleam, “We visited with the fish for a few minutes; took some photos, paid copious amounts of love and respect, and accepted it as an honorary Hi-Laker member before gently releasing it.”

And then uncle Brooster slowly closes his eyes as he finishes, saying, “For the rest of that day I think I was in shock.  Perhaps even for the days and weeks that followed.  I had memories and photos of the fish proving its existence, but my mind struggled with the idea that it was possible to catch a fish of that size at a high lake. Even to this day it feels like a dream or a figment of my imagination. And I’m ok with that…”

Editor’s Note:  The above story is true, except for the boy named Rudy and the actual character names.  The names of the people were changed for story purposes only.   The fish is reportedly the largest documented fish caught in a WA alpine lake and that’s all I’m sayin’.  Congratulations and hats off to you, uncle Brooster!  😉 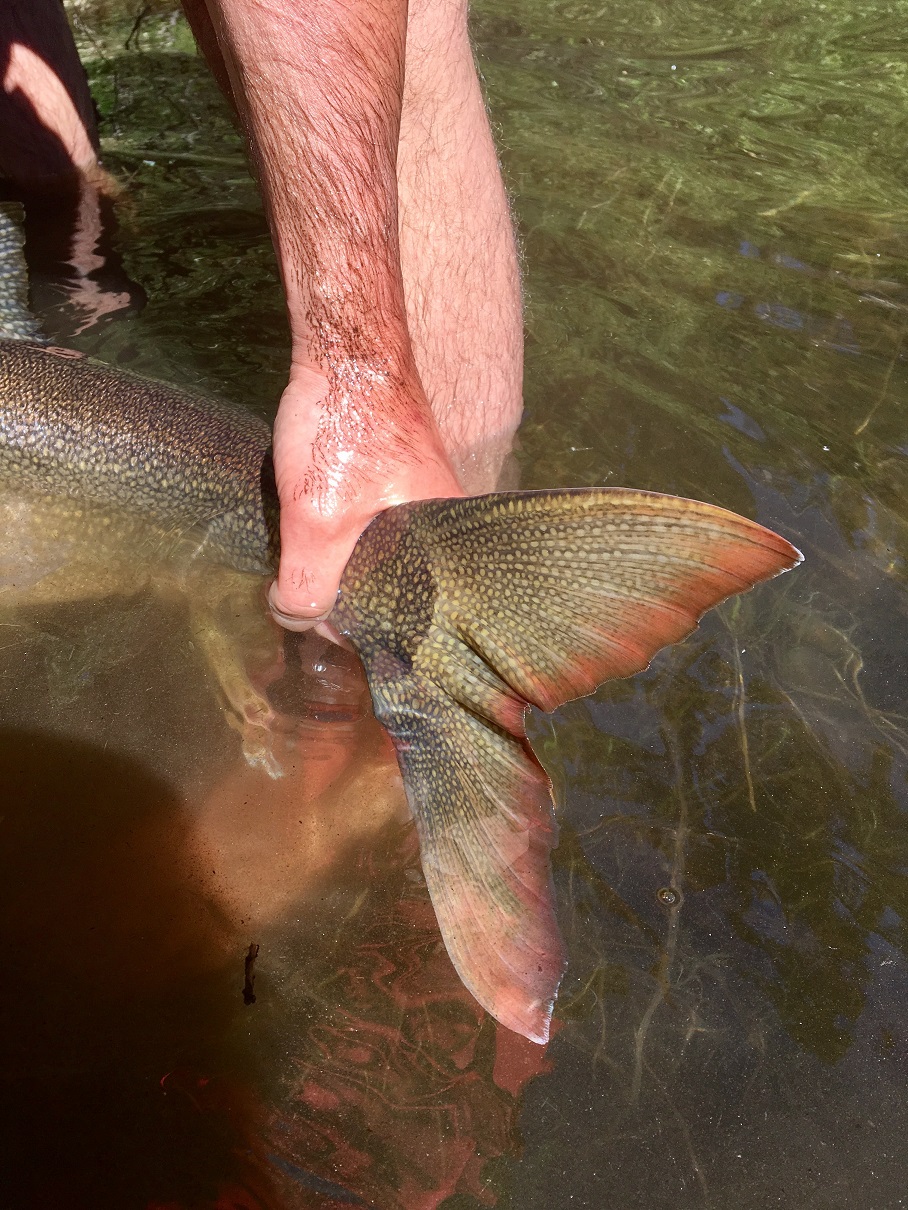 Bigger is Always Better, Right? ~~~Or Is It?

Confidence is a Strange Thing… 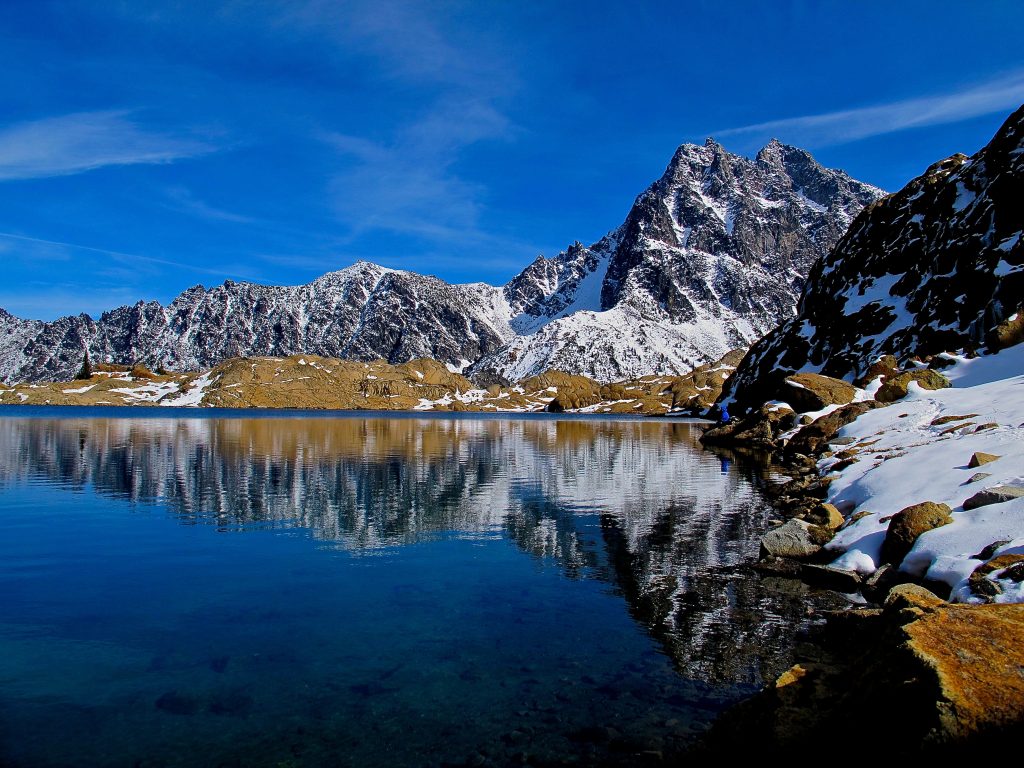 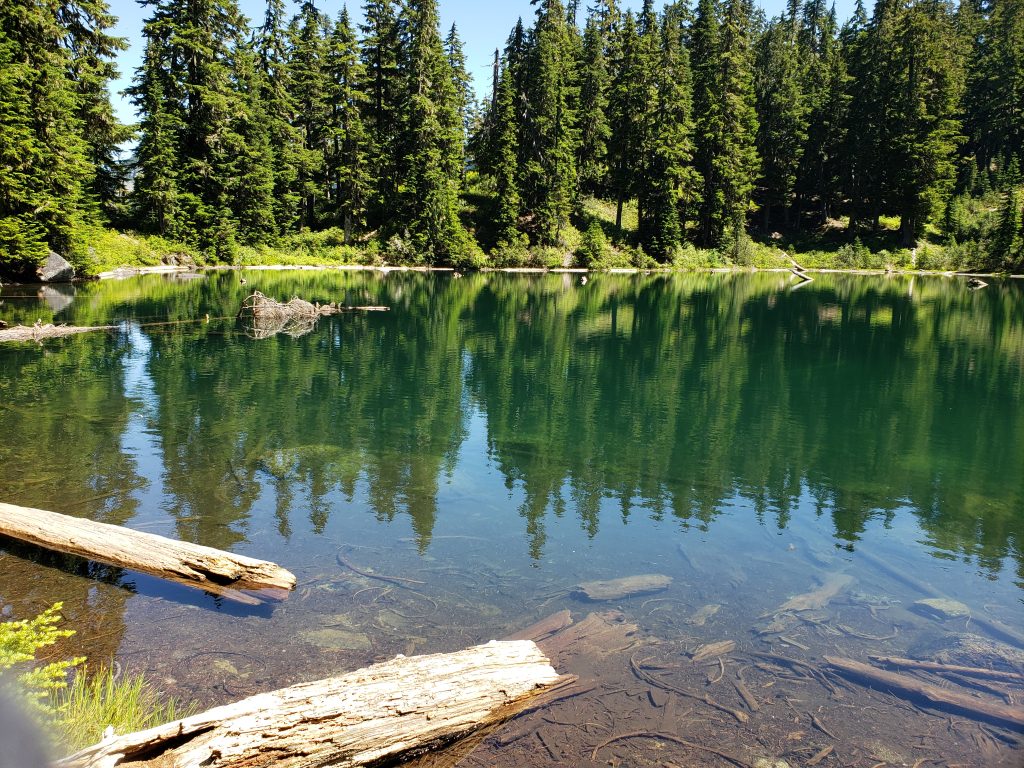 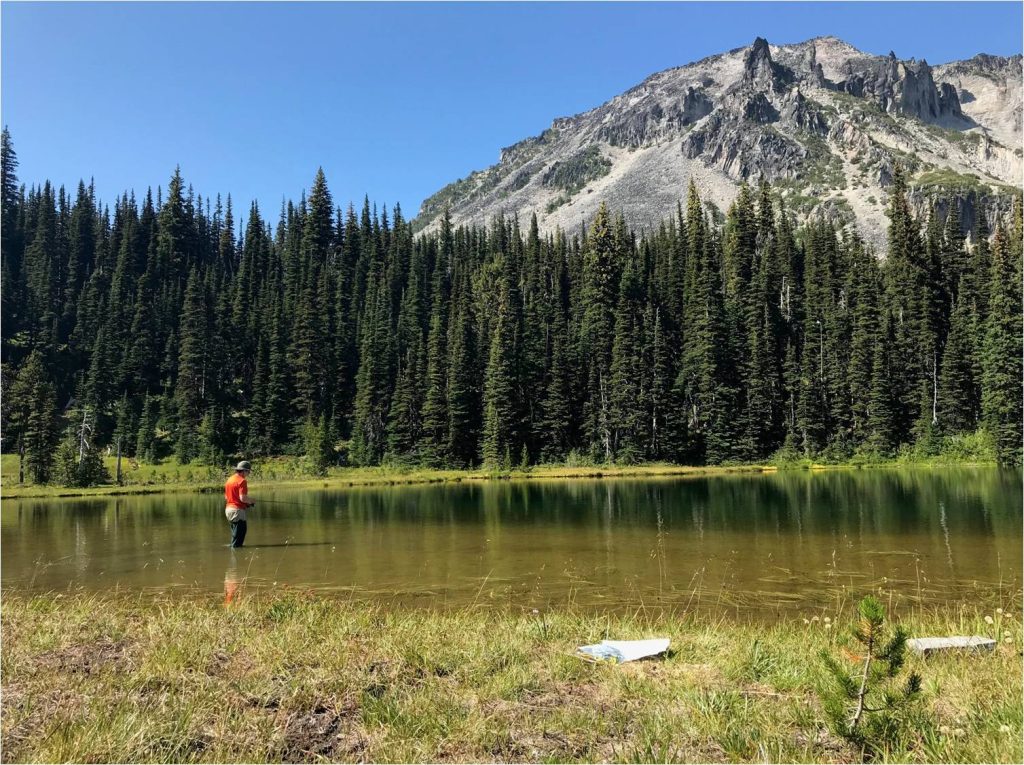 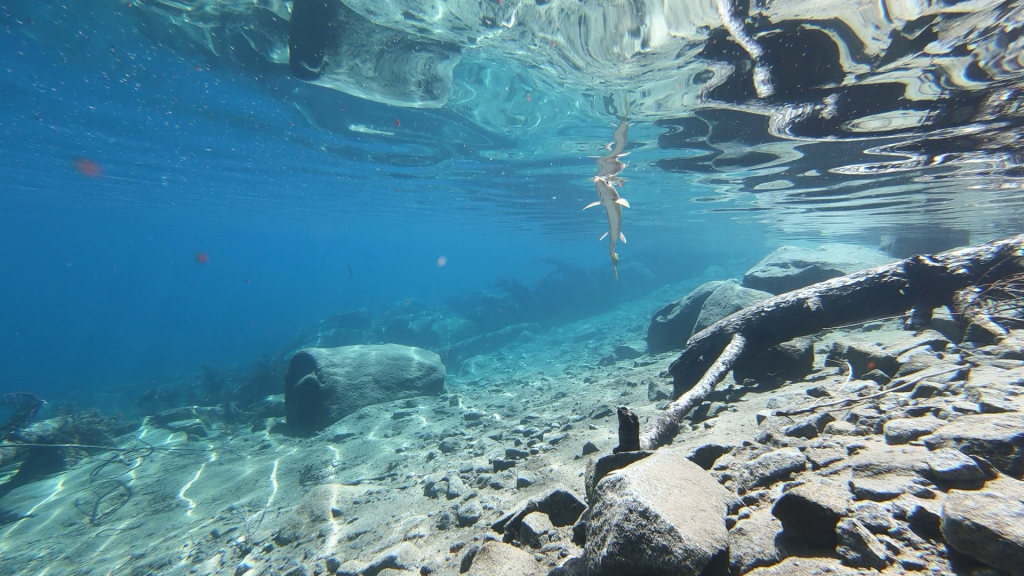 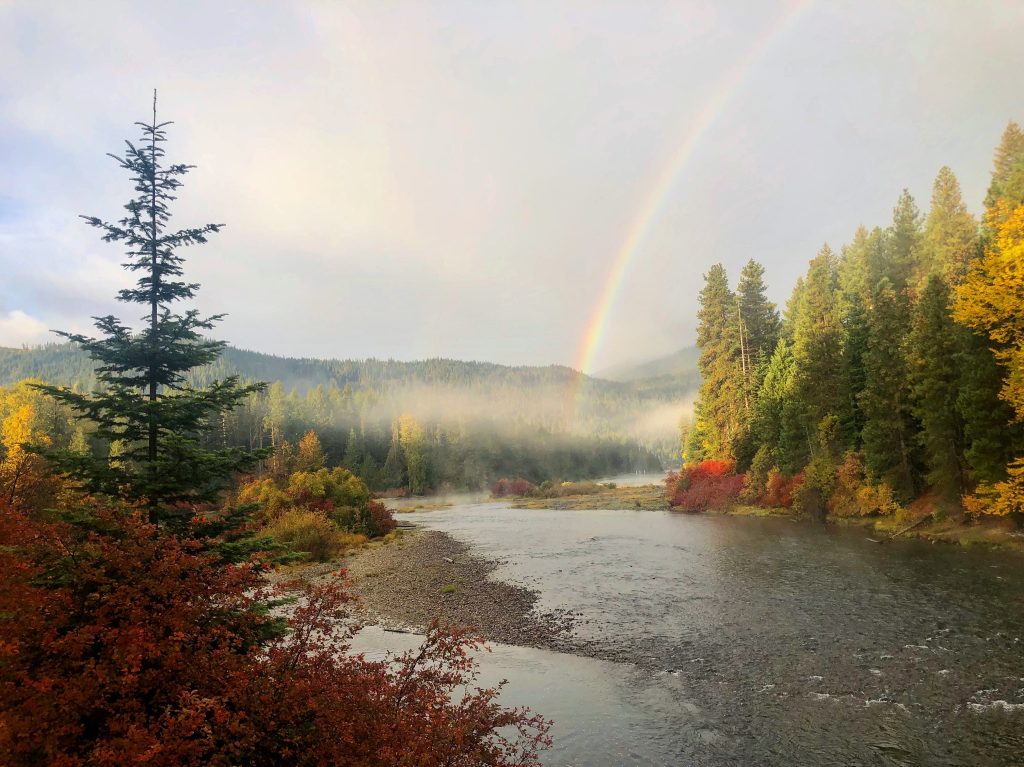